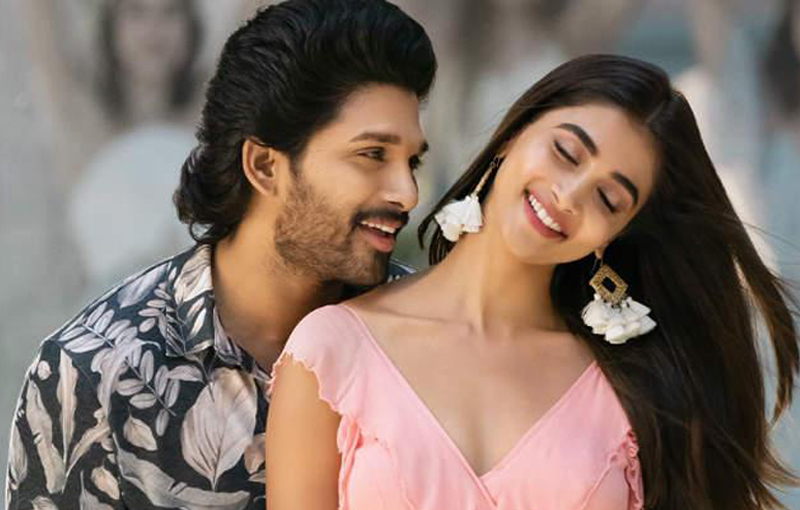 The heart which lauds for emotions inside family, and believes the human emotions are the ultimate soul of the living nature, will always be enthralled by the Tuneless poems written by Trivikram Srinivas.

Combining with Allu arjun after 3, did the swagest combo take us to the Vaikunthapurram for this Sankaranthi! What’s exciting in this dharshan?

The baby swapping of a jealousy father (Murali sharma)   where bantu (Allu arjun) grows up under him.

Millioner Ramachandra (jayaram) wishes his Rajmanohar( sushanth) was more responsible. How bantu’s life intersect with them marks as the the core plot of ala Vaikunthapurramloo.

Building the exclusivity for 2 long years, Allu arjun steps the feet of a family entertainer, with the same impetus he had.

The character he portrays here stucked in the fate produced mediocre life.

His performance wave, never shuts like Him who cater the feel of cuteness while accepting his  Omg daddy, spanning the excitement of in packing the bags shows his maturity in his craft.

Thin ling, the character doesnt misses value of the emotions , so does he himself who will  tickle your laughters at the emotional “writings “and the drain the same in emotional scenes .

Special mention on the “Meeting scene ” where  imitates all the fellow actors of tollywood in an ease, who proves that the man is tailor made swag ships.

The places where bantu stalks pooja hegde, who has her own cuteness in elevates the romantic portions with her charmness.

Tabu is reentry in Telugu, and Samuthirakani is shhhhh mannerism are interesting elements which wasn’t used to their own potential.

The place where Jayaram melts down after knowing the truth reminds us the cliche emotional shots, which is saved by the actor ‘s performance. The need of Nivetha pethuraj still unknown.

But Trivikram is a poet right!  His efficiency in tailoring t level of Murali Sharma’s character, on whom the film revolves,  who creates a big fuss has his own problems which will entertain us to the core.

His major step on caring his biological kid than the one is in home, who admires him in till the climax is one character played by Murali sharma which is the best.

Technically, it is the duty of these superheroes to tuck  the best shot as the perk to the clean writing, where the soul is injected by Music director Thaman. S.S. For his elevating action scenes,  romantic hiccups , he deserves a great bow.

Sketching  the reason behind Thamans performance, the real Sutra is man concentrates more on tune differences above the instruments.

What can’t this man do? Give him whatever genre,  he will create the utmost magic from his instruments.

The work of cinematographer P.S.Vinod, spills us choices with a quirky smile, where the frames in optional destinations including Paris, Hyderabad and the home can be extracted has 3 separate films.

Ram laxman ‘s stunts , especially the climax one , who boasts on the top of thamans music to give us one of the best choregorapgies in telugu.

Even the authors are taking their own chapters to establish the characters and creating the chaos, here the celluloid man opens the knot at beginning 15 minutes and spreads the sheet till the end, which fortunately looks like a gift wrapper.

the place where Trivikram’s instinct comes into play is when he fills the silver screen with by casting attractive actors on screen. The pricks and pains on each character who aren’t focusly webbed  on each other and the emotions on others  are interesting to watch. But the Trivikram template on following the same high class rich family with the mix of His Julayi and Agnyaathavaasi fades slowly when the dosage is low.

Joining as the third film, Ala Vaikunthapurramloo is pure Allu arjun feast, with Trivikram’ s elements incorporated in it.

An Elating Incident here to prove the Bonding of Thala -Thalapathy!