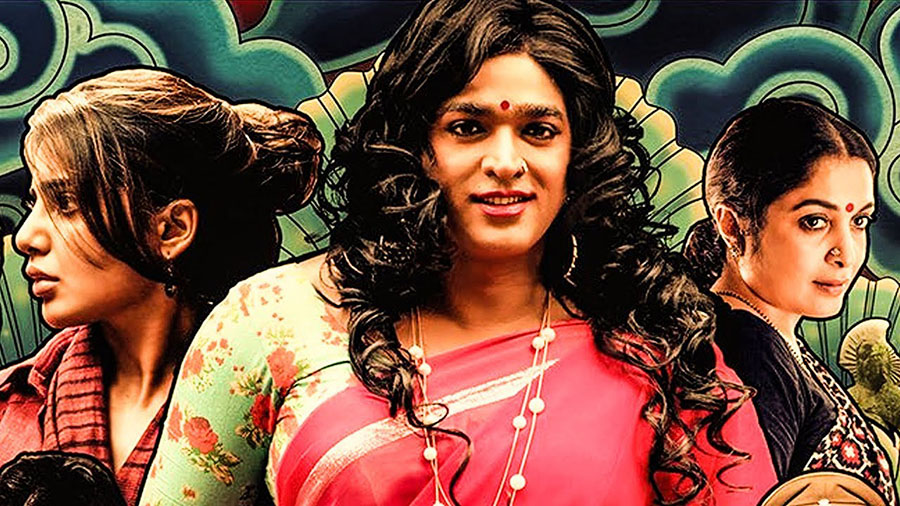 There’s what you do, and what you don’t – nothing’s right or wrong says Thyagarajan Kumararaja in his second movie. He treads the line between the real and the surreal in bringing together multiple strands of narratives into an ending, well multiple endings! The connections are quite tangential, like they were brought together so that it could be one feature film, not an anthology of short stories. The stories themselves look like they were written by different writers (as they are) with almost no idea of what the other writer was up to. In spite of that, one wonders how almost every writer (save the guy who wrote the character played by Mysskin) paints at least one guy in his story as a total dick. Really, men in this movie are portrayed as if they think only through their hard on, which they seem to have in their pants even when faced with the harshest of circumstances.

All problems of the central characters in this movie start off because of a sexual misadventure. The And it never stops. We have teenagers who don’t forget to gawk at a sensual song on TV even when they owe a thug a huge sum by evening, we have a middle aged lady at a CD shop who asks the said boys to not be shy about asking her for shady blue films, we have a sub inspector of police who doesn’t mind dropping his pants inside his station knowing fully well that his subordinates are aware of what he is up to. You start to wonder whether these characters feel nothing but lust through all their waking hours, not even fear! The character sketches are so one dimensional, they could have been huge dicks and no one would have noticed the difference. If women were portrayed the same way, it would have been called objectification, misogyny and whatnot, like the recent 90 ML was panned by everyone. It is hard to see how Super Deluxe is any better or different in terms of what it wants to say.

The answer to that lies in the skill of the director to capture his audiences through a mix of visuals, dialogues and sounds. It is the difference between saying a four letter cuss word in Tamil and English. You say it in Tamil and you are unsophisticated or unpolished, and you say it English you are the cool guy! Super Deluxe is the cool guy of Tamil cinema who can get away saying ‘fuck’ and ‘shit’, while the guy who said ‘otha’ is frowned upon.

Thyagarajan Kumararaja chooses to set his film in some place in Chennai, we believe, where the building exteriors look straight from the 90s. One can’t recall one building in the film that did not have the paint falling off or the interiors looking dull and faded. And you have walls carrying posters of movies that were released over various points over the last 20 years. One doesn’t understand if those are pop culture references! What would a poster of Bulletproof Monk be doing on a wall in 2018, or what was adapted from that movie to Super Deluxe for the director to pay it a tribute. Pop culture references and tributes should not confuse the viewer about the actual year that the movie is set in. Apparently, not everyone can be a Steven Spielberg and make a Ready Player One. Anyone who watches Super Deluxe with open eyes is bound to feel confused about whether this is a period story. But then you see smart phones and LED TVs which allay your doubts. It is difficult to understand what the director conveyed to the art department about his requirements and how it was understood.

Vijay Sethupathi was brave to walk into a role that made him take such a huge risk for so little substance. That again is down to physicality and sexual orientation. The man has no starry egos or worries about his image. He doesn’t mind exposing his growing paunch or going half bald, nor does he mind being ridiculed by a child – he is the director’s actor. One just feels sad that even his character is a one-trick pony with precious little screen time. Samantha was challenged a bit and comes out well, but one wonders what drove Fahad Fazil towards this role! One feels that he took up this role more because of Aaranya Kaandam than the actual script of Super Deluxe. The same can be said about Ramya Krishnan. Bhagavathi Perumal is the epitome of everything that is wrong with this movie – writing that boxes characters into one dimensional puppets – the man who cannot think about anything but sex! And you have the teenagers – perhaps the only characters in the movie that have more than one emotion to portray. But, that too culminates in the most bizarre of ways – an example of escapist writing at it’s most extreme to mouth a few philosophical lines about how everything in the universe is almost the same. Even there, the director doesn’t spare the sexual angle.

The dialogues do help a lot in making the most disagreeable of ideas seem smart, and that is what keeps the movie going. There is some interesting idea about how casteism is just as good or bad as nationalism, which might make people think. The background music (or should one say the background sound track which is many old movies and serials playing out) has been studiously done, with songs and dialogues being picked to add context and humour to the dialogues of the characters. Curiously, the Stars Wars signature music is used here, one wonders why. It does show the director’s lofty ambitions, but he ought to have picked better written material to justify it. Here, it seems more like a desecration than tribute. It is the editing that somehow makes a little sense of all the mess. Even that cannot resolve the muddled timelines of all the threads that are left conveniently unexplained in the end – apparently not everyone can be a Christopher Nolan and make a Dunkirk.

Thyagarajan Kumararaja is a smart film maker. He knows the art of presenting pseudointelligent trash under the garb of philosophy and life advice. People were nude 1000 years back, and they might be nude 100 years from now, so why think that clothing is imperative – says a character in the movie. The director must be asked, copyright laws did not exist 1000 years back, they might not exist 100 years from now, so why bother with antipiracy laws, let the pirated DVDs flow freely. Nothing’s right or wrong, it’s just what you do – isn’t that what you want to say director?

Pesudointelligent trash and sexually overcharged males – nothing else!