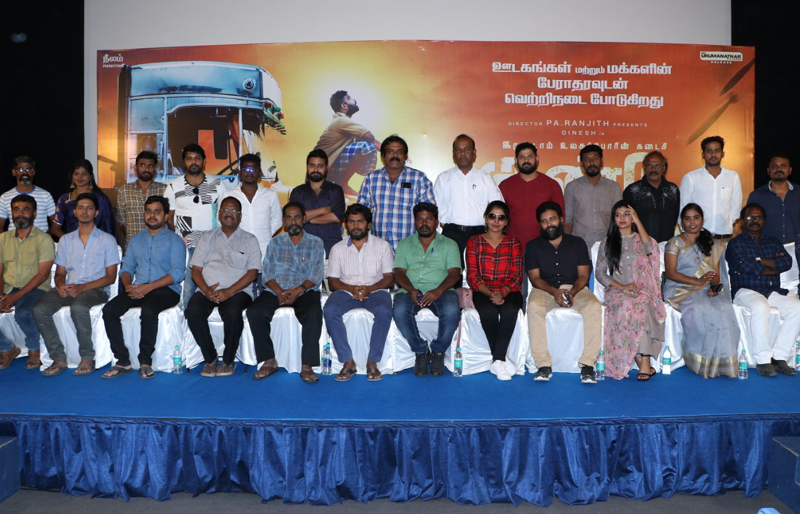 Content oriented films are raging in the Kollywood industry, which is tickling the audience mind like a magician’s his witchstick. We could see the audience, celebrating the content without getting stuck under any sensual fabrications or star power, which is also becoming a challenge for the makers to feed the viewers.

Recently, Irandam Ulagaporin Kadaisi Gundu is one such film, which is blasting the screens with its content, speaks about the peace and love with its own limitations.

After it stupendous victory,  the thanks giving meet, which was held today, had  master mind behind the film, director Athiyan athirai had a few words to share about the film said, ” I know the films victory , before its theatrical screening , as it was screened for the lorry drivers  who appreciated us  that the film reflects about their life. I really thank media for giving us a breathing space  ,which was really helpful for the film’s success.

As I already mentioned that , the word ” Thozhar” made me to stand out from the normal life, where I believed that this word will take me to places. In fact , director S.P.jananathan spotted me in ‘vazhakku en 18’ screening, which totally changed my life.

I also thank, my hero Dinesh  and producer Pa.Ranjith who helped me for my steadiness and the victory. pa.ranjith, who owns such a status, will motivate us without any differention and discrimination. Also I thank the entire cast and crew, who helped the film to stupendous victory.”

The thanks giving meet, had the presence of entire team including actors Anandhi,Rrithyvika, Munishkanth and  director Pa.Ranjith leading it from the front.

Actress Anandhi ‘s performance as “chittu” in the film Irandam Ulagaporin Kadaisi Gundu, gave  breezy feel to the audience, when the screen play was travelling at the rustic peak.

In the thanks giving meet organized by the, the charming actress shared a few words, who said” I sincerely thank the audience from celebrating this film , where I was In the dilemma before the release. The inspiring journey of my director Athiyan is always respectable,  and which has a destined him to the right place. Finally, I feel truly blessed and honored to work in this film and i will strive hard to give work in such wonderful scripts”.

The film which talks about the peace and love hiding behind the rustic war, was emotionally received well by the audience. Kadaisingundu is directed by Athiyan athirai, and the film Marks as the second product from neelam productions after Pariyerum perumal.

Actor Dinesh has a few words on his latest film “Gundu”!!

The breed of versatile performers in Tamil cinema, always hold a special place for actor Dinesh,  who can go blind by his “cuckoo” or melt us by his “visaaranai”. The actors presence in his latest film Gundu, the powerful performance  displayed by his character was loved by the fanatics from all around the globe.

In the recent meet, The actor joyed out on the accolades he is receiving out now on his Gundu, spilled out his  experience who said ” I thank the press and media for being briskly receiving our speech, which acts the source of conversion for the energy to your work. I thank my team, especially the director himself who pulled out the best work from artist, only by his love. I sincerely request him to not lose his innocence among the business which is ruling the kollywood. It’s nice to see , our heroine Anandhi carrying herself as a dignified star, which inspires me a lot. I finish my speech by thanking the assistant , drivers and directors who worked day and night for this film.  They must be recognized for their minute works, and I hope them all for a bright future”.

A very few directors step in on the motive to educate the viewers, with out compromising themselves under any commercial stuffs. Director Pa.Ranjith , is one such gem discovered by the tamil industry, who always heads up his content for the discriminated people.

Neelam productions is one firm, which plucks the great talents who are struggling to place out their spot in the limelight. Now, the prestigious firm tasted a great victory with the recent film “Kadaisi Gundu” . The film recently had its success meet, which had the presence of the eminent CEO  Neelam productions, who said ” I never stepped this industry on the motive to become a producer or a director.my college days and the films which I watched like “bicycle thieves” stamped my eyeballs towards the camera and this art. During my early days, director sasi encouraged me to watch world films with out any compromise. In fact, many don’t like my speech , though they love my film but many wanted me to restrict my speech.

Parallely, when I was carrying out these negativities , I could see the best content oriented films and products didn’t have the best recognition.

In fact, when I worked in Kabali , I never dreamt of working with superstar  but when I performed the dialogue written by me on Ambedkar  gave me the real contentment in my life. Such a mass star adding such a soul to my lines gave me a great satisfaction. I thank press and media for giving a great recognition for both Gundu and Pariyerum Perumal, pulls me to give out some good films like this. Pariyerum Perumal had a great obstacles in all aspects , but the gesture and support given by the pressed moved me . To be honest, PP was a great profitable film for me, as it broke the myth of the content oriented films will rock the box-office too”

The director finalized his speech by thanking the cast and crew of Kadaisi Gundu, for blasting this film in all around the corner.