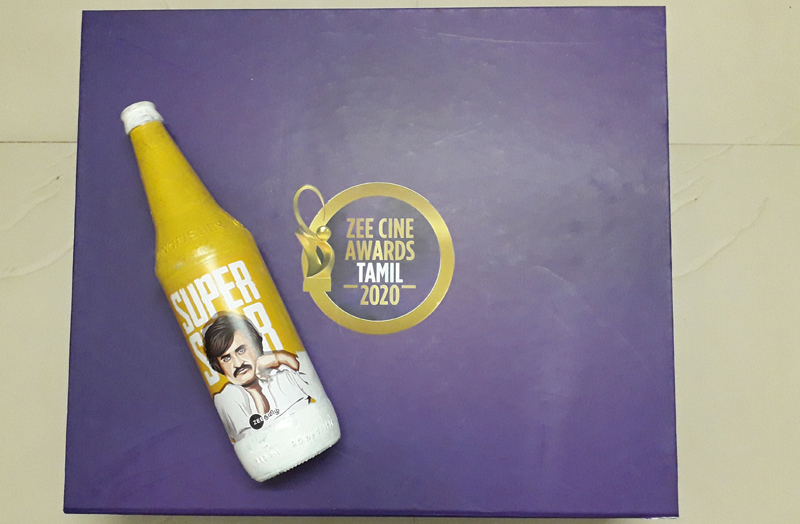 The godly status of superstar rajinikanth in india is something divine, especially in the south,  the aura he created with his products has a great magnetic field intensity from the 6 to 60s. The day he stamped the political arena,  Rajini himself and the Entire wing of Rajinimakkal mandram present, where keen on designing their own products , relief funds ,boxes and other objects to be in a dignified manner without any unnecessary magnifications and glorification . But , here comes a private TV channel to bash fhe image of the star, with out any consciousness in their own limits.

Yes! The prestigious zee entertainment Group , who hold a great TRP/viewership in south, with their channel Zee tamil, is stepping on their next league by organising their own award function titled “Zee cine awards”. For the year 2020 , the event is planned on Jan 4th , with the invitations and cards are already circulated to the major medias and other TV channels. But the real wave took at

The posters designed to glorify the image of stars like Rajinikanth,  Ajith,  vijay , Kamal. The promotional posters which impregnated their pictures in  creativity miniatures and objects  , placed superstar rajinikanths poster in a beer bottle, which has brought a big shock for the fans. The care taken by the RMM  offlate, especially after the words of Rajinikanth who predominatly preaches against the consumption of alcohol is well known to the TN public. Now this negative gesture from the channel, has a improved the probability of the stars image reaching the kids and womens with a bundle discomfort to emerge out.

Such an act from the channel currently receives a negative rage from the fans, as the focus on the bottle, has tilted eyes from moving it to other packages.

Previously, in Kabali promotions, the creative team had come up with innovative cups , silver coins and t shirts , which still Holds a special place in kids- rack, who get elated by roaring it has the “kabali dolls”.

The general motto of creativity is to elate the receiver curiosity and attain it with a dignity, rather it shouldn’t show any negative format, which is currently happening to the Zee tamil packs.

People murmur on the dignity of Award functions as the invitation well proved it.