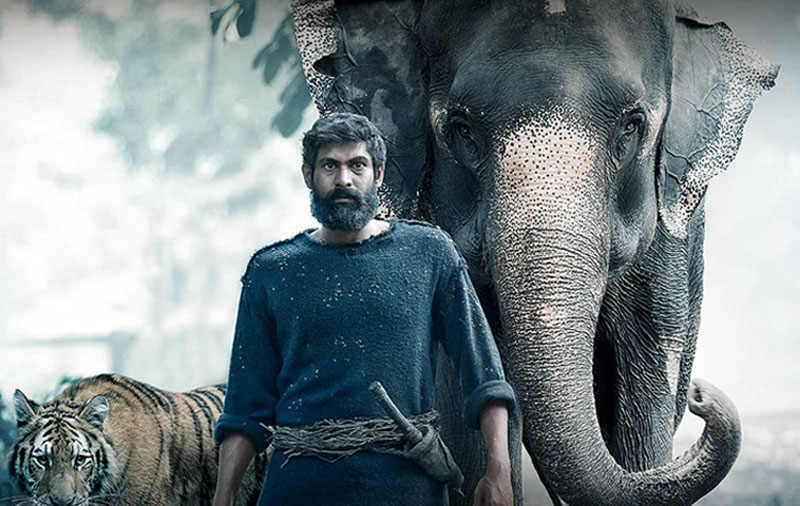 2020, Aranya starring Rana Daggubati in the lead is one of the most-awaited films. The Eros International production will star Rana as the protagonist in all three titles along with Vishnu Vishal in ‘Kaadan’ in Tamil and Pulkit Samrat in Haathi Mere Saathi’ in Hindi.

The highly anticipated film also features Shriya Pilgaonkar and Zoya Hussain in interesting roles. Meanwhile, making a lot of noise currently is Rana Daggubati’s never seen before avatar in the action spectacle. Ever since the makers revealed his first look from the film, fans couldn’t stop gushing about it. The 35-year-old actor will be seen portraying the role of a jungle man called Bandev. To get his right look in the film, the star followed a strict diet and underwent extensive training to lose over 30 kgs of weight.

In the film, he’s seen sporting a heavy beard and grey hair look and has a tilted shoulder throughout the film. Interestingly, the makers tried different looks for Daggubati’s character and until first day his final look wasn’t revealed to him. Giving us details about the massive physical transformation, Rana revealed, “Prabu Sir wanted everything to be real and organic. It was very difficult for me to lose all the weight since I have always been a guy with big physique. I had to undergo extensive physical training to get the lean look for this character of Bandev. It has been a wonderful and learning experience for me.” Produced by Eros International, all three titles, ‘Haathi Mere Saathi’ in Hindi, ‘Kaadan’ in Tamil and ‘Aranya’ in Telugu are scheduled to release on Thursday, April 2nd, 2020.

Inspired by the unfortunate event of humans encroaching the elephant corridors in Kaziranga, Assam, the film is directed by Prabu Solomon. In the film, Rana is seen playing the role of a man who dedicated most of his life living in the jungle with the sole purpose of protecting the animals inhabiting it. Later, makers have shown how he becomes part of a conflict in order to protect the wild and nature.

Chinmayi gets emotional on #10 years of Samantha!