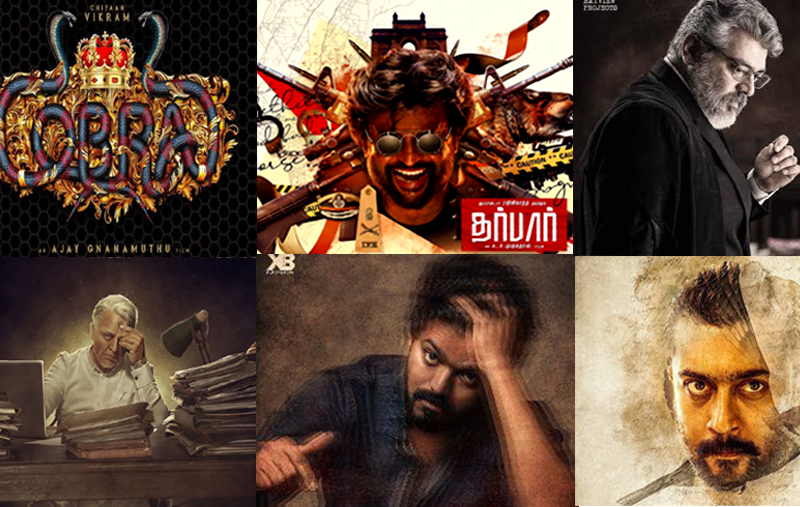 Can sense the exhaustion of the readers who are hit hard with the ratings and reviews of the film which came in 2019, with its data.

We had about 200 films releasing this year, but a handful films didn’t bite the funders hand.

Though we aren’t an astrologer to predict what is going to be in the basket of 2020,here we have some exciting datas about the films releasing in 2020.

Let’s have a complete look on it!

this mighty film from superstar Rajinikanth is the trigger set by the lord to start the year for the distributors and theatre owners present.

Factually, last year ,it was his Petta ruling all over the world which marked a biggest victory by collecting over 250 crores in world wide market.

The posters and trailers marketed around this film, purely says that this script is majorly based on a commissioner of Mumbai, fighting against The ills.

More than the fans, the film has a huge expectation  amongst the traders around the film industry, where his latest “Bigil” created a rage in box office.

But the real essence of this waiting is on the time on which the film will pop put, as it is slated for April 2020 release.

April is always a blessed month, as it comes of after the dry Feb and March.

A Vijay film on April??! Isnt it nice to hear.

Master is directed by lokesh , with Anirudh scoring the music.

Thala ajith had the best outing of this year, who had the blockbusters Viswasam and Nerkonda paarvai, which hard pressed his presence amongst the family audiences and womens.

Valimai being a cop film, and directed by the “brainy” H.Vinoth , this film has all the expectation to show the real “Valimai” of the star.

The ultimate principle behind Chiyanism states that, whenever the star fall, he becomes double time stronger.

Yes! After the disastrous sketch and Saamy square  the actor sways the commercial potboilers and move back to the trending track.

Cobra’s motion poster and its theme music is enough to show a pan indian film is in making.

Cobra is directed by Ajay Gnanamuthu and music done by The oscar man.

The much awaited sequel of the patriotic “Indian” which was out in 1996  doesn’t need any special description to show out.

The intriguing poster and the hidden eyes of the Bigg Boss, who is  “older, wiser and deadlier” lands this 2020 to hit hard.

Indian 2 is directed by Shankar and music done by Anirudh. The film is yet another biggie from Lyca productions

Nothing to talk about the wrong decisions took by the Versatile star, who came up with two average films In 2019, which lead the actor’s hard work to go vain.

Will the lady save the “Kaapaan” from the ring?

Soorarai potru’ s first loom response In Twitter , which had a great amount of retweets is one good start for the film

2020 is exciting as a giant circus, which has a lot of participants stepping in to cater as the best start for the next decade.