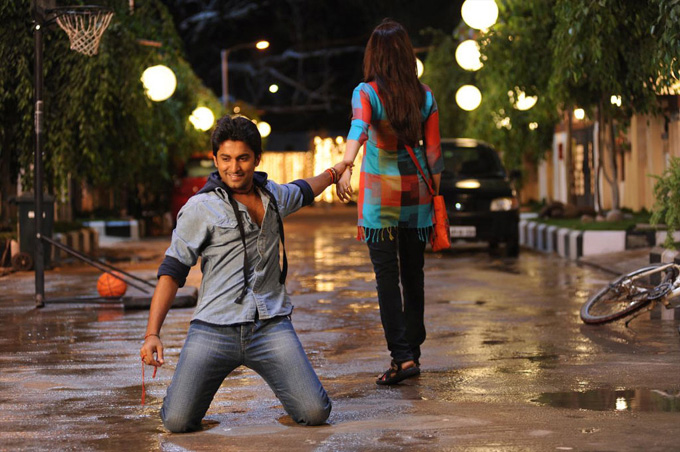 How often have we heard of reincarnation in our movies? Pretty often! We have come to treat it as a cheesy concept that should have been phased out long ago. Yet, S.S. Rajamouli takes that road once again. Of course, it is a road that has given enormous amount of success in the recent past with films like Arundhathee and Rajamouli’s own Magadheera (Maaveeran). But, this time, the ‘reincarnation’ aspect is given a twist that perhaps is a first in world cinema – the hero returns in his second birth as a housefly (Ee)! Wow, what an outlandish concept to make a movie with!

Naan Ee is definitely a first in Indian cinema, at least in terms of the crazy concept that it employs, of course, if you discount some films by Vittalacharya and a few other ‘serpentine’ flicks, which find a brief mention in Naan Ee. The film is about Naani (Naani) and Bindu (Samantha); all the makings of a love story, beautiful and romantic! But, ‘Bad boy’ Sudeep has to interfere in this picture-perfect love story and nip it in the bud at a very cruel juncture. In normal course, this would be the interval point of many commercial entertainers. But, in Naan Ee, all this transpires within the first 20 minutes or so. And then, he is back, as the fly, to take sweet revenge.

Unbelievable as it may seem, the captivation of Naan Ee lies in its brilliant visualization and scripting. You just have to doff your hat (if you already haven’t) to the wonderfully fertile imagination of Rajamouli. We have heard of ‘bird’s eye view’; here, we get a ‘fly’s eye view’ of the world, as it struggles to survive from the trampling feet, the small water droplets, the cigarette butts and whatnot! The body language of the fly designed to convey his emotions without making him speak are excellently nuanced and executed. This might look like exaggeration, but the quality of animation and VFX in many places can stand shoulder-to-shoulder with Hollywood. We have seen movies like ‘A Bug’s Life’ and ‘Antz’ where small insects play key roles. But, those movies made those characters speak to reveal the emotions. Here, Rajamouli makes the fly communicate to the audience without uttering a word. The creative and technical expertise behind every shot involving the fly is of the highest order. Really, this movie shows that it is not in the 100 crore budgets that the future of Indian cinema lies, but in the boundless imagination of filmmakers like Rajamouli. Naan Ee rivals and perhaps even betters the visual perfection of Ra One and Endhiran. The first few minutes after the appearance of the fly, the scene with two birds chasing the fly and the climax really are the portions where the finesse of the visual effects can be seen.

There is really nothing much to talk about the plot here. It is as old as the hills, one can say. If this was not about the fly going after the villain, then it would have been just another commercial potboiler not worth a second glance. But, the fly makes it a one-of-a-kind experience. Scripting is done in a way that you don’t have to suspend your logic all in one go. Rajamouli phases the development of the fly’s revenge-taking powers in a very intelligent manner, involving Bindu’s help to add to the plausibility of things. Except for the initial romantic moments, not much time is wasted on the love track, which is a good thing. An injudicious decision to add a duet would have been a heavy dampener. In fact, except for a montage song, there is nothing else and the best part is that you don’t even notice the absence of songs. Only the character of Tantra seems to be built up for no big reason and is then finished off far too swiftly without justifying it. A couple of scenes here and there could have been chopped off, like a naked Sudeep prancing around going after the fly, which would have made the movie more suitable for children.

The performances in this kind of a film demand something extra from the actors. They have to interact with a make believe non-existent imaginary insect which will only be inserted in visual effects. It is here that Sudeep’s performance stands out in the film. He is the one who has to react the most to the presence of the fly and he brings it out extremely effectively. In fact, many scenes in the movie rely purely on his spontaneous reactions and he doesn’t let us down at all. The only glitch you can detect is with his dubbing in the emotionally charged scenes where his Tamil sounds a bit awkward. Samantha too does really well in her scenes with Ee; this is perhaps the first role in Tamil that has tested her acting skills. But, the star of the show if of course, Ee; credit for which goes to Rajamouli and the visual effects team.

Of course, Naan Ee as a film requires you to swallow the concept of reincarnation, of a fly taking planned revenge etc. But, your suspension of logic will not go in vain as Naan Ee is a full throttle entertainer with visual perfection. The kind of effort that went behind making every frame look real can be imagined. So, if we can accept the logic behind Hollywood flicks where toys come to life and ants talk English, then Naan Ee too deserves the same status.

At the end of the film, you might wonder why Rajamouli had to bring Santhanam in for just one scene. But, don’t walk out when the credits are rolling, because a Santhanam capsule plays along and you get around half a dozen jokes in quick successions, Crazy Mohan too joins in. One guesses that these were comedy scenes originally inserted in the movie, but then edited in favour of crispness of the plot, extremely good decision – the plot does belong only to Ee.

Naan Ee is by all means a landmark in Indian cinema, on the visual effects front. It is an emphatic statement that you do not need 100 crores to create great visual effects. The plot might be a very familiar one and you might have to suspend your sense of belief, but Naan Ee is worth it. Don’t spoil the experience by questioning the possibility of reincarnation; instead enjoy the imaginative genius of Rajamouli in every frame.

Verdict: This housefly will captivate you!