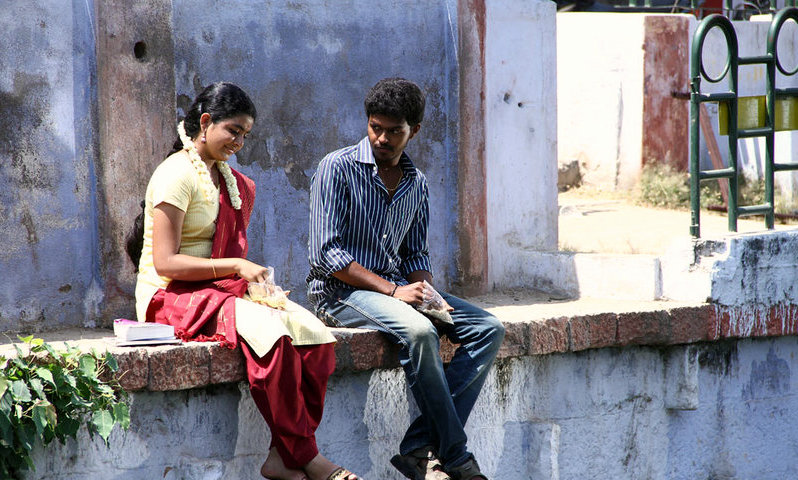 A love story of the adolescents! That’s a pretty common sight on the big screen these days, especially with films like 3 and Vazhakku En 18/9 releasing within a short duration. So, is Rattinam just another addition to the growing list of adolescent romances? The first thing you should know about Rattinam is that it is not just another empty adolescent romance spiced up just for heck of it. The movie goes beyond being a tale of puppyish love and immature relationships, which sets it apart.

Rattinam tells the tale of two young boys who are after two girls because of what they think is love. One boy just doesn’t know how to go and reveal his feelings while the other boy has all the guts in the world. But, things take a rather funny turn when the relationships do not quite work out in a way that the boys had imagined. At this point, you might think that the movie is just another adolescent romance which tries to create a story out of the hormonal rush of youngsters. It continues in that vein for some time with a full fledged romance blossoming out of a few lies! That’s perhaps the point where the director wants to stress on the rather hollow nature of these relationships. Later on in the movie the director dwells more on the families of the couple in love, showing how such an unwarranted and immature romance affects life in both homes. By the time the movie ends the message from the director is very clear and you will be convinced that this movie is an attempt that is worth lauding.

The best thing about Rattinam is that it does not cross the line of teen romance. There are no unwarranted intimate scenes or songs, which is a very good thing. Of course, there is an elopement, but the director handles things well. There might be a few questions raised about the way in which the parents react after the elopement and also about the violent bit that follows. But, that is not the crux of the movie. The focus is on the issue that sparked off everything.

Performances in the movie are as natural as you would expect, especially from a cast that has very few known faces. Be it Laguparan, Ajai, Swathi or Revathi, they look perfectly matched to their parts. The same applies to all the supporting characters in the movie. Director K.S.Thangasamy shows that he is also a good actor by putting in a fine performance as the hero’s elder brother. The use of the 6 songs also cannot be faulted much. Other technical aspects hold quite well with the requirements of the movie.

Rattinam might initially feel like another movie that wants to exploit the possibilities of underage romance. Yes, a major portion of the first half makes the film look that way, but you have to give the director enough time to establish his premise. Also, credit to the director for not letting the movie slip into uncomfortable or unnecessary scenes. The real high point of the movie is definitely the final 30 minutes where the message is delivered with gumption. You cannot help but be convinced by what is being said. That is where director K.S.Thangasamy succeeds in his debut venture. A sincere attempt that is worth a round of applause!

Raattinam : A worthy attempt and a strong message well delivered