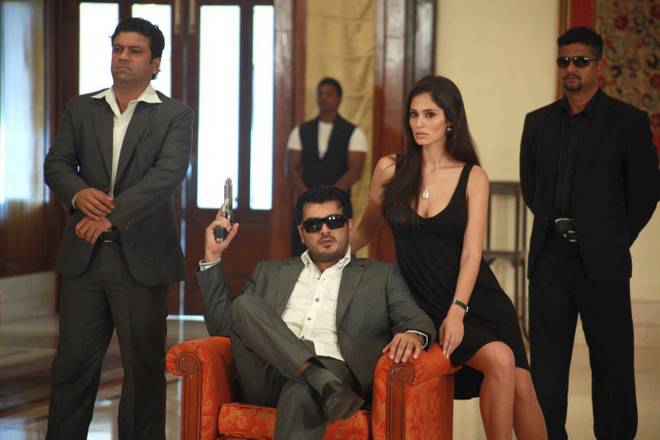 How did David Billa become ‘Billa – The Don’? Billa 2 tells the story of the genesis of the most celebrated celluloid don of Tamil cinema. Ajith returns as David Billa, the role that gave him on of his biggest successes. Expectations, as is always with an Ajith movie, have hit the roof. The challenges that director Chakri Toleti faces are quite unnerving. To preserve the ‘larger than life’ persona created by Vishnuvardhan in Billa 1 and at the same time craft a story that plots a plausible track of an ordinary man becoming a feared don.

David Billa is a refugee and has to put up with life that looks bleak. He also has to put up with oppressive forces that threaten to trample upon him and those like him. But, when a chance is presented to get out of that misery of a life, he grabs it with both hands. But, that leads him on a path that has lots of blood and gore in it. He doesn’t mind! He wants to survive and wants to get big. As one dialogue in the movie goes, ‘it’s not desire that drives him, it’s hunger’.

The biggest challenge in such a movie is to make the evolution of David Billa into the Don seem one that is plausible and logical, not mythical. The team of Chakri Toleti and Eric Feldberg have succeeded in etching out such a story and the team has converted it into a fairly good script. The growth of Billa from a refugee, to a small-time hit man, to smuggler, to right-hand man of a don and then to being a don is told step by step; or let’s say assignment by assignment. He does not become don in one magical moment of inspiration. It is a combination of circumstances, opportunities, guts, fearlessness and hunger that make him the don. These things are portrayed very well in through the script. The graph that leads Billa from being a commoner to a don is excellently plotted and all characters in the fray are well-constructed.

But, a well-calculated graph alone does not make for great movie. Surprisingly for a gangster flick, the drama is more absorbing than the action in Billa 2. The tensions between two underworld business partners, the cloak of trust that hides the undercurrent of mistrust, the ever-alert eyes and trigger-ready fingers are all depicted well. The tension between the characters is palpable on screen, a place where Chakri Toleti scores well. One daresay that he has got finesse for shooting scenes that are high on drama. But, the finesse that he has in drama seems to be completely lost in action.

What’s a gangster flick without some racy action and thrills? The team of Billa 2 knows it and has tried to provide it in ample measure. But, most of it falls flat. Billa could have been ‘Billi- the cat’, because he seems to have nine lives; approximately the number of times he escapes after being at the mercy of guns, many times at point-blank range. One wonders why his adversaries are so finicky about shooting him; he shows absolutely no mercy in return. They hold him at gun point, talk long dialogues, use a gun to hit him on the back of the head without actually putting a bullet him and then seem to think that he is dead. And, you have a bunch of coast guard officers with machine guns missing Billa when he is hardly 10 meters away from them. He even gets upon a platform, offering something akin to target practice to a gang of foreign goons who still manage to miss him. These are the portions which are completely in contrast to the tight and gripping drama that Chakri Toleti is able to present. Where did the intelligence disappear in these portions? And, to think that it is so easy to assassinate the Chief Minister of a state! And on the one occasion that Billa does get shot, the bleeding magically stops as he continues fighting; all you are left with is a small patch of blood on the white shirt. This might seem like nit picking, but in a movie that otherwise looks to plot a logical story of a don’s genesis, such gaping holes look out of place. Such things could have been overlooked if the movie was a complete ‘larger than life’ hero vehicle which wants to do nothing else but eulogise the hero. But, Billa 2 is not such a movie and that is why these scenes stick out like a sore thumb.

The best thing about this movie, as is with all Ajith movies, is the presence of Ajith itself. His screen presence is simply awesome and he lends an intimidating persona to the character of David Billa. He looks imposing, delivers some well-timed one liners and keeps the screen alive at all times. Vidyut Jamwat and Sudhanshu Pandey are menacing as the dons in their respective countries. Manoj K Jayan looks bewildered and confused as the character of Koti demands. One wonders why Rahman was brought in for just the one shot? Parvathy Omanakuttan hardly gets any space. She is used mainly as a bait to lure Billa into spots of trouble. This role doesn’t seem like helping her in gaining a foothold in Kollywood. Same can be said about Bruna Abdullah who just has to wear designer clothes, in spite of her character having a few undercurrents. Ilavarasu makes his mark in a cameo.

Technically, Billa 2 is top-of-the-shelf stuff. No expenses have been spared. R.D. Rajasekar makes each frame look slick and stylish, especially in the second half. However, he also gives the rough touch to the initial parts of the movie in the refugee camp. Ajith’s look in these portions too have been designed well, mindful of the fact that he should resemble a refugee. There is no portion of the movie where Yuvan’s work makes you take notice; the BGM does not match the persona of Billa, nor do you remember any of the songs. The picturisation of the songs too is redundant; lots of girls dancing under disco lights! One song that does leave a mark is the ‘Unakkulle Mirugam’ number – a montage where Billa’s growth in the underworld is depicted through sketches and desaturated images – interesting to watch. Dialogues make a mark on the odd occasion, with the best lines being expectedly reserved for Ajith.

One more thing that is difficult to understand is why the movie begins the way it does. Was it just because the director wanted the movie to begin with a fight? One cannot think of any other reason.

The good thing about Billa 2 is that it does not waste time in hero worship, unnecessarily building up the entry of the hero in scenes or giving tangential references to Thala etc. You see only David Billa on screen, which is a step in the right direction. Also, there is no attempt to justify his actions or him becoming a don; he is a don because he wants to be, he is remorseless. The story shows the evolution of Billa, connecting different parts of his growth story really well. But, it is in the execution of the operations and mainly the action scenes that Chakri Toleti fails. And, the climax does not pack too big a punch. All this aside, Billa 2 can be watched for Ajith’s inimitable on-screen charisma, a well-constructed story (especially in the first half) and above all because this is the story of how Billa’s journey began.