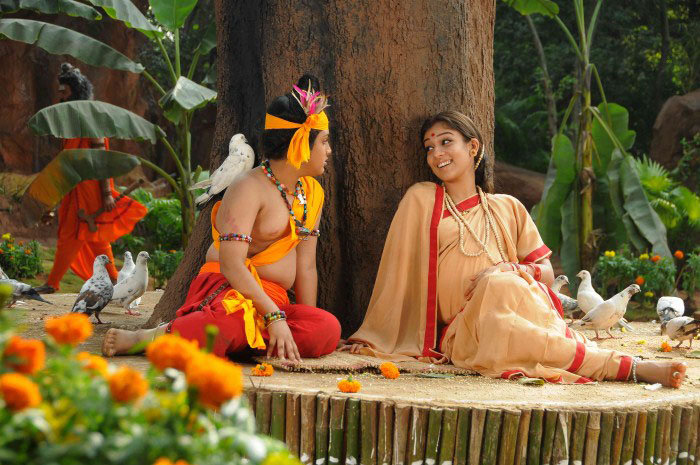 There are some stories that never really grow old, no matter how many times they are told; perhaps that’s why they are called epics. Ramarajyam is yet another interpretation of the epic Ramayana. When we say ‘yet another’, it might sound like an announcement of frustration. But, be assured, it is not so. It is used just because the Ramayana has come to us in so many shapes and forms over the years. Ramarajyam is however, different. It does not show us the most popular parts of the epic, which is the 14 year long life in the jungle of Lord Rama which culminated with the battle in Lanka. Ramarajyam takes off from the point where Lord Rama and Sita return to Ayodhya after their exile. It tells the story of the separation of Rama and Sita because people, blinded by thoughts and notions of infidelity, doubted the chastity of Sita.

Cruel as it may be, it is exactly what transpired. The mental agony that Lord Rama is put through and the extreme step that he takes to save honour and how the people finally come around to realize the fact that trust is perhaps the most important thing in life.

First, the makers have to be lauded for taking up one of the little known portions of the epic, instead of making the simple decision of going ahead and making an exciting spectacle with Ravanan and the huge Lanka battle. They have given the closing portions of the Ramayana the respect and space that it deserves instead of making it a footnote in a big movie. There are absolutely no deviations from the set plot no flashbacks to the battle period, no miracles by Lord Rama or anything of that sort. More than showing Rama as a God, the movie shows him as a man, a king, who upholds his morals and values above anything else in life. Sita too is shown as the ideal woman, not as the daughter of a Goddess. The high point of the movie itself is the moral standards that the characters set for themselves; levels that we cannot even imagine these days. But, this is definitely a good reminder of the kind of values that a person is ideally expected to uphold. There are many incidents in the movie which make us feel profoundly which is a rarity these days.

The movie has not been made in line with new age cinema principles. There are 16 songs; that kind of thing is straight out of the 60s and 70s. But, you do not feel the film dragging in spite of this. And, the scripting and pacing of the film is very unhurried. The dialogues are almost theatrical. But, all these things work well for the film. Many portions of the film involve a lot of graphic work, the standards of which might remind you of an 80s TV serial, with animated deer prancing around in a garden. Now, that might seem cheesy in 2012, but that too gels along with the general mythical mood of the movie. Really, the old-world charm that the original Ramayan TV serial had seems to be there in this movie too, which is one of its USPs.

The one thing they could have avoided was painting Lord Rama (Balakrishna) in blue. Blue-blooded might be a common term to denote royalty, but the makers seem to have taken it far too seriously. There was no need to do that to Lord Rama. The blue look apart, Balakrishna looks serene and majestic as Rama. Then, there is Nayanthara as Sita. Well, there were doubts as to whether she can fit the role. But, she does look radiant and in every frame she looks the part, no doubt – a committed performance. Srikanth supports ably as Lakshman.

Considering that the film was originally made in Telugu, the dialogues seem very well written in Tamil. The dubbing too is first rate, especially SPB for Balakrishna. The camera in Ramarajyam has kept things bright and colourful, in an outdated but appealing manner.

Ramarajyam is a film that tells us about a lesser known portion of the Ramayana; that in itself is a good enough reason to see it. It has been made at a pace and style that suits the Ramayana, not current cinema trends. The sets and graphics might look a bit too synthetic for current tastes. But, the timeless nature of the story and the emotions expressed by the characters in it makes Ramarajyam a since effort worth appreciating.